The Story of Frog’s Leap

Never spoil a good story with the facts.

As undergraduate at Cornell, John Williams obtains an internship at Taylor Wine Company, and discovers that a winery is full of tanks of booze, pretty girls giving tours and absolutely no cows unlike the dairy farm he grew up on. falls in love with wine. 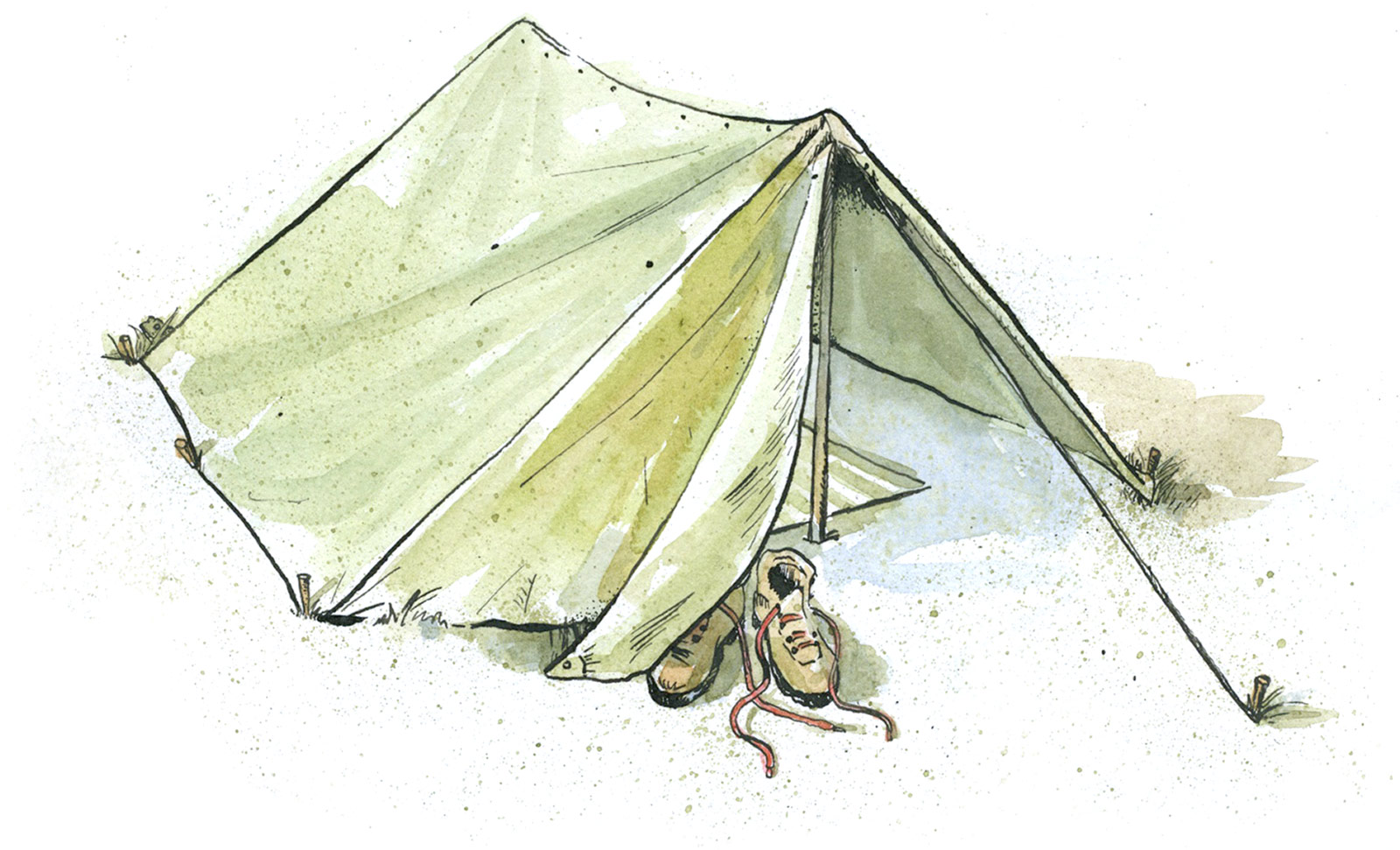 John makes a pilgrimage to the Napa Valley on the Greyhound Bus, meets Larry Turley while illegally camped on his property, a former frog raising farm; after two bottles of wine they agree to start a winery together. Larry helps John get a job with his friend Warren Winiarski. As the only employee at Stag’s Leap Wine Cellars John keeps cellar notes and helps bottle the ’73 Stag’s Leap Cabernet. He proceeds to total Warren’s car on his 5th day on the job. At Larry’s urging John obtains a motorcycle to make the commute between UC Davis, Stag’s Leap and the Frog Farm.

While quaffing almost the entire batch of fizzy Chardonnay John made from grapes he borrowed from Warren, the two coin the name Frog’s Leap as well as the inexplicable clever phrase “Time’s fun when you’re having flies!” that becomes the winery’s official motto.

John is (still) the sole employee of Stag's Leap Wine Cellars when the announcement is made that the '73 Cab had won the Paris tasting. A serious pain in the ass! 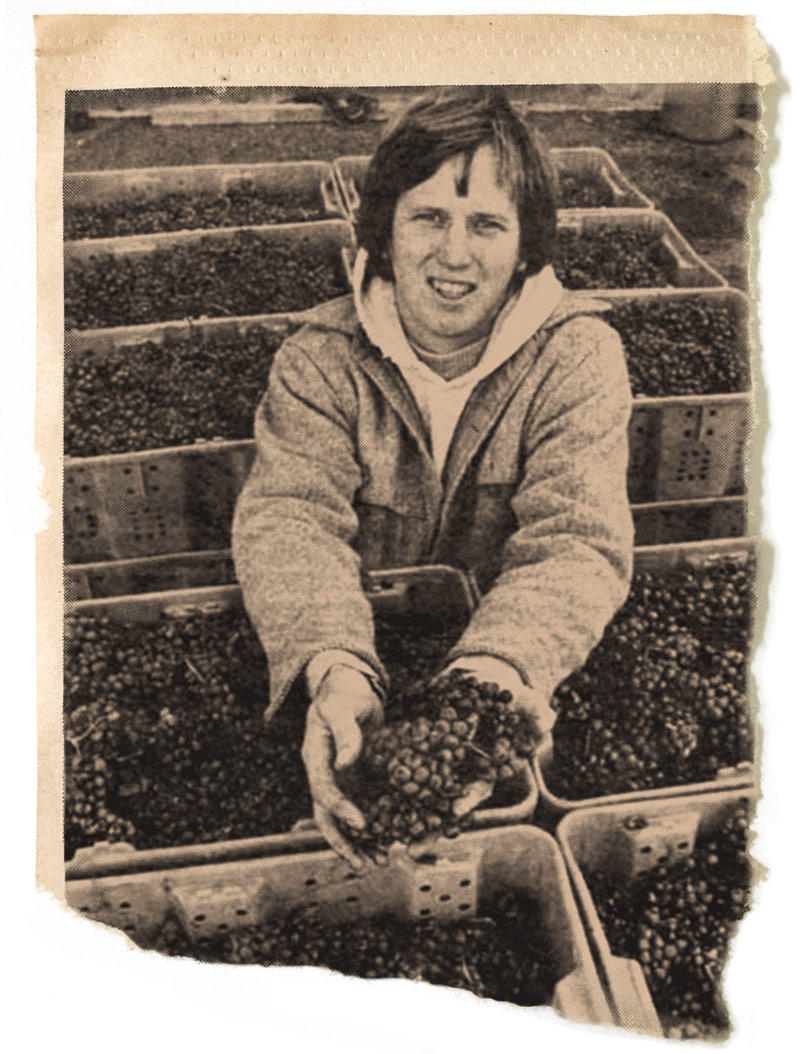 John graduates from UC Davis; becomes winemaker at the newly opened Glenora Wine Cellars on Seneca Lake in upstate New York’s Finger Lakes region. At the opening of the winery, a reverse-wired motor in the new crusher spews one-half of a ton of Baco Noir grapes into the assembled crowd, including the State’s Lieutenant Governor—An auspicious start for the dairyman from Clymer. 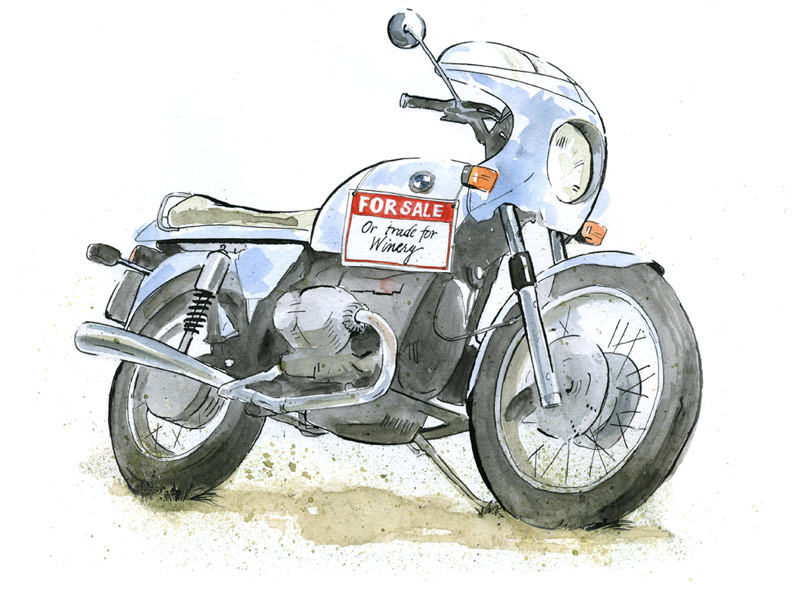 John returns to Napa Valley to become head winemaker at Spring Mountain; marries Julie Johnson at the Frog Farm; renews a pledge with Larry to make wine—a task completed that fall in a borrowed an unused hot tub. John and Larry sell their motorcycles to raise the cash to launch the project as no bank would loan them the money. 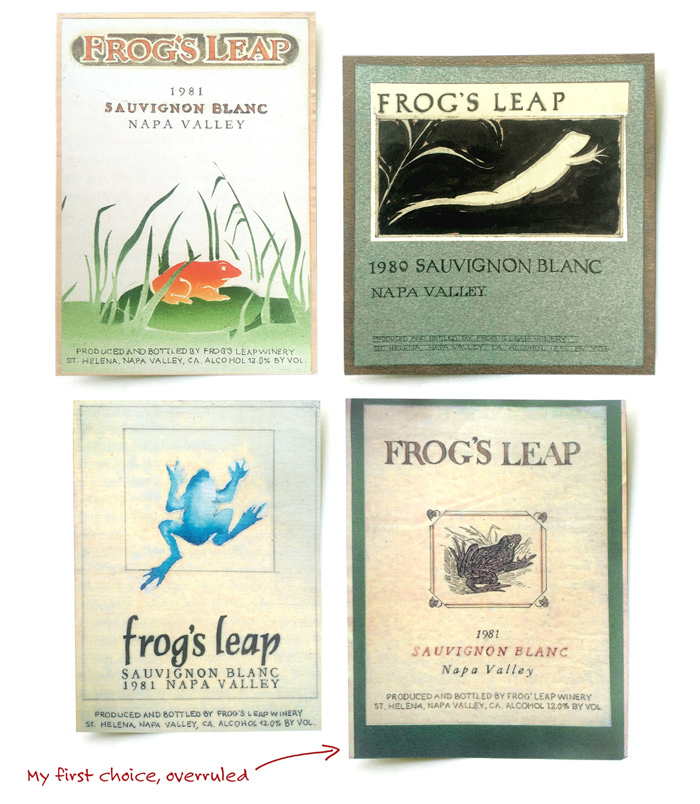 First Frog’s Leap wine is released—a 1981 Sauvignon Blanc, featuring designer Chuck House’s award-winning label; Terry Robards’s story “Frog’s Leap: A Prince of a Wine,” appears in New York Times. Spottswoode, the original fruit source for the Zinfandel replants to Cabernet. With no source for Zin, John makes Cabernet and tries his hand at Chardonnay. At Spring Mountain, John is kicked off the set of “Falcon’s Crest” because he’s told he does not look enough like a winemaker. for being too good looking.

The Ahwahnee Hotel becomes the first big account to carry the Sauvignon Blanc.
...and has sold a case a week ever since! 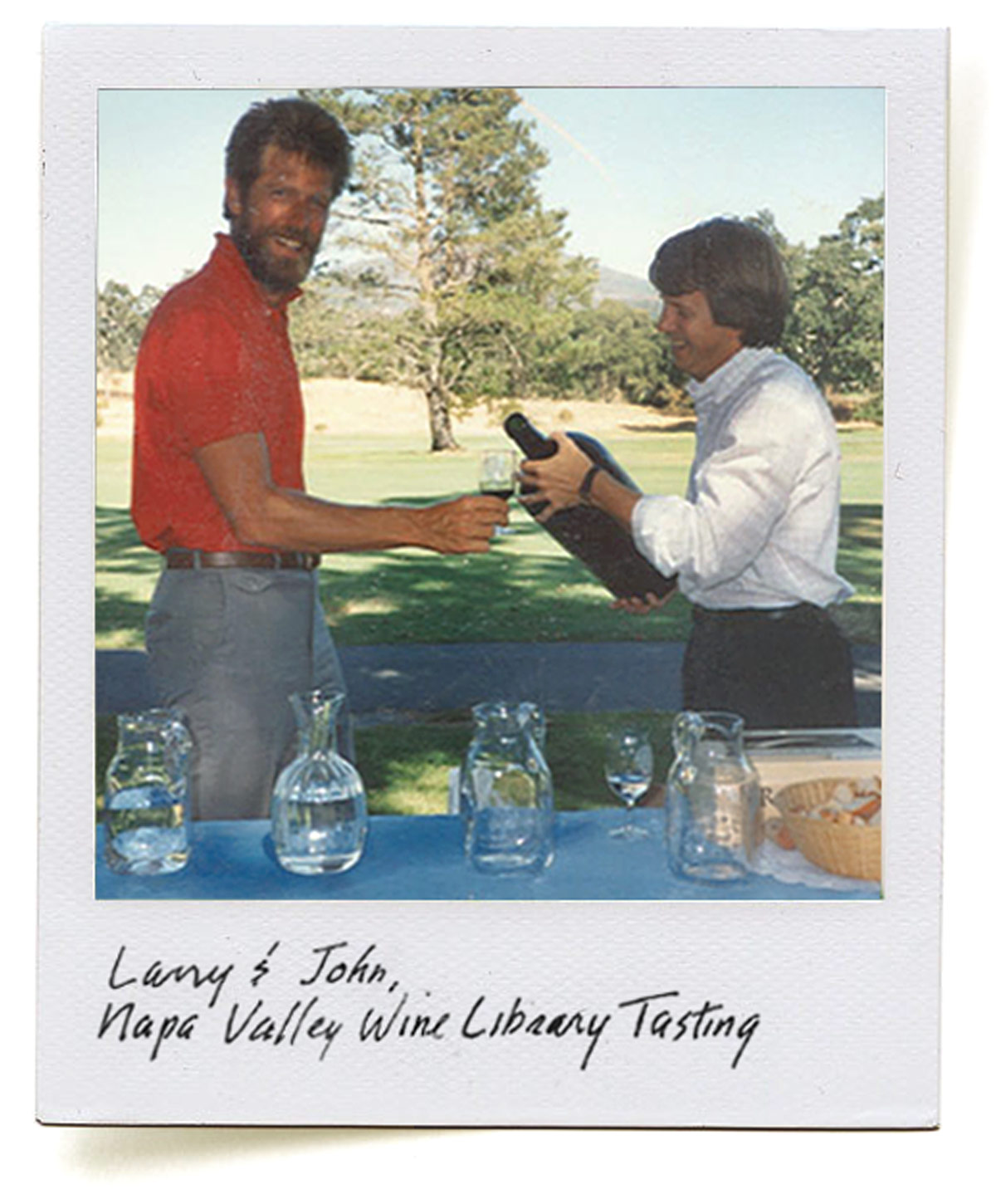 The 1984 Cabernet Sauvignon is released.
Just had this the other night, such a good vintage...

Convinced that organic farming will produce a healthier vine and a better wine, John seeks more information and is introduced to Bob Cantisano through a contact at Fetzer Winery. John works with “Amigo” Bob to establish farming protocols, and convinces his grape grower partners to grow organically by offering a financial incentive. Pat Garvey, Lee Hudson, Mike Wolfe, Frank Leeds, and Andy Hoxsey agree to join John in becoming among the first to “go organic”. John is now introduced at industry meetings as "that hippie farmer".

Larry Turley sells his interest in Frog’s Leap to The Williams family and starts Turley Wine Cellars on the original Frog’s Leap site (the Frog Farm). John and Julie seek a new location for the winery. 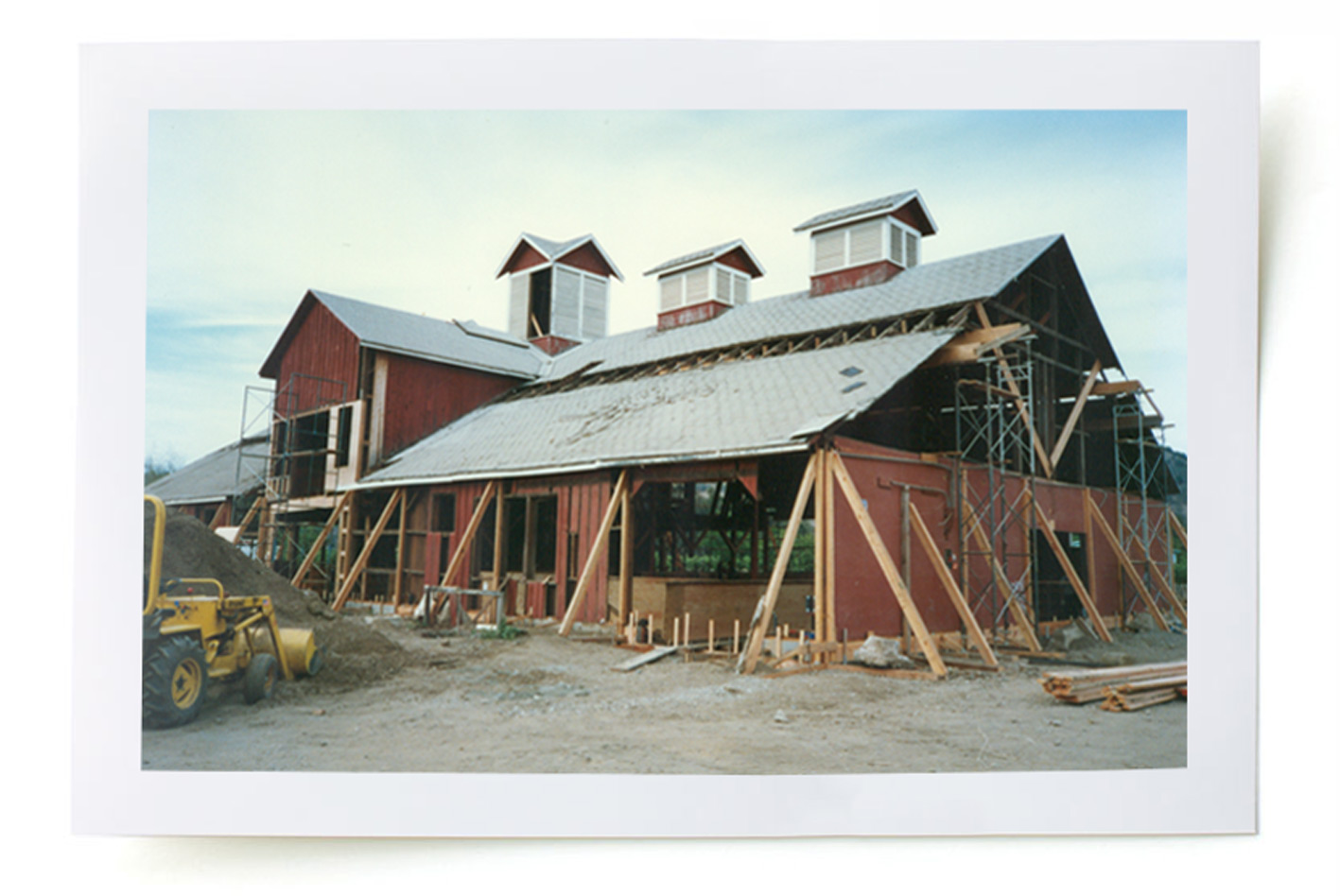 Frog’s Leap secures a long term lease on the Red Barn and officially moves to Rutherford. The property includes a partially collapsed historic barn and some vineyards nearly dead to Phylloxera. Architect Ned Forrest designs a master plan for a “new old winery estate” that begins with reconstruction of the Red Barn. Construction extends into late summer and catastrophe is narrowly avoided as tanks and grapes arrive on the same day. Dry farming practices introduced by Frank Leeds and his Uncle Roy Chavez resuscitate the vines enough to harvest some SB and Merlot. Paula Moschetti is hired as the company's first lab rat. oenologist

In a pivotal moment in Frog’s Leap history, vintner Chuck Carpy helps John to secure a loan and purchase the Red Barn from Freemark Abbey. The property includes 40 acres of decrepit prime Rutherford vineyard in addition to the restored barn and newly planted orchards and gardens. With the acquisition of this land Frog’s Leap realizes an important milestone—the ability to control their own farming practices. Sadly, Chuck passes away soon after facilitating the sale. 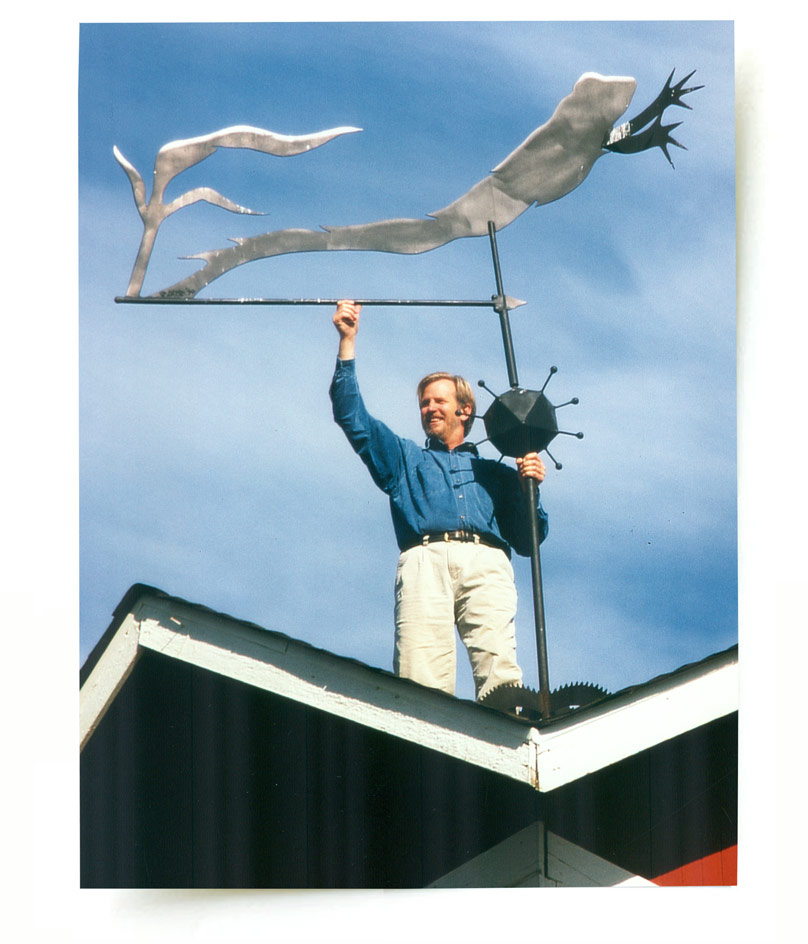 The first “Rutherford” is blended from dry-farmed grapes from the Chavez Leeds Ranch as an expression of Rutherford terroir. The winery secures a long term lease on Garden Vineyard, a prime Zinfandel resource in Saint Helena. With it’s hillside location and gravely loam soil this 15 acre resource meets John’s long term goal to farm his own grapes.

Inaugural release of Leapfrögmilch celebrated at Calistoga’s first and last leiderhosen party at the Mount View Hotel. The winery purchases 52 acres of riverfront land in Rutherford at the end of Galleron Road. Moving Frog’s Leap one step closer towards an entirely estate-grown Sauvignon Blanc program. Winery begins to export to Japan and UK.
Humbled and flattered to have such interest in our particular winemaking style overseas.

First release of winery’s “Rutherford” (1996 vintage) a blend of Cabernet Sauvignon and Cabernet Franc; Frog’s Leap begins construction on the Barrel Chai next to the Red Barn; Julie and John separate.

Petite Sirah is planted at Galleron after uncovering a small section of gravel. 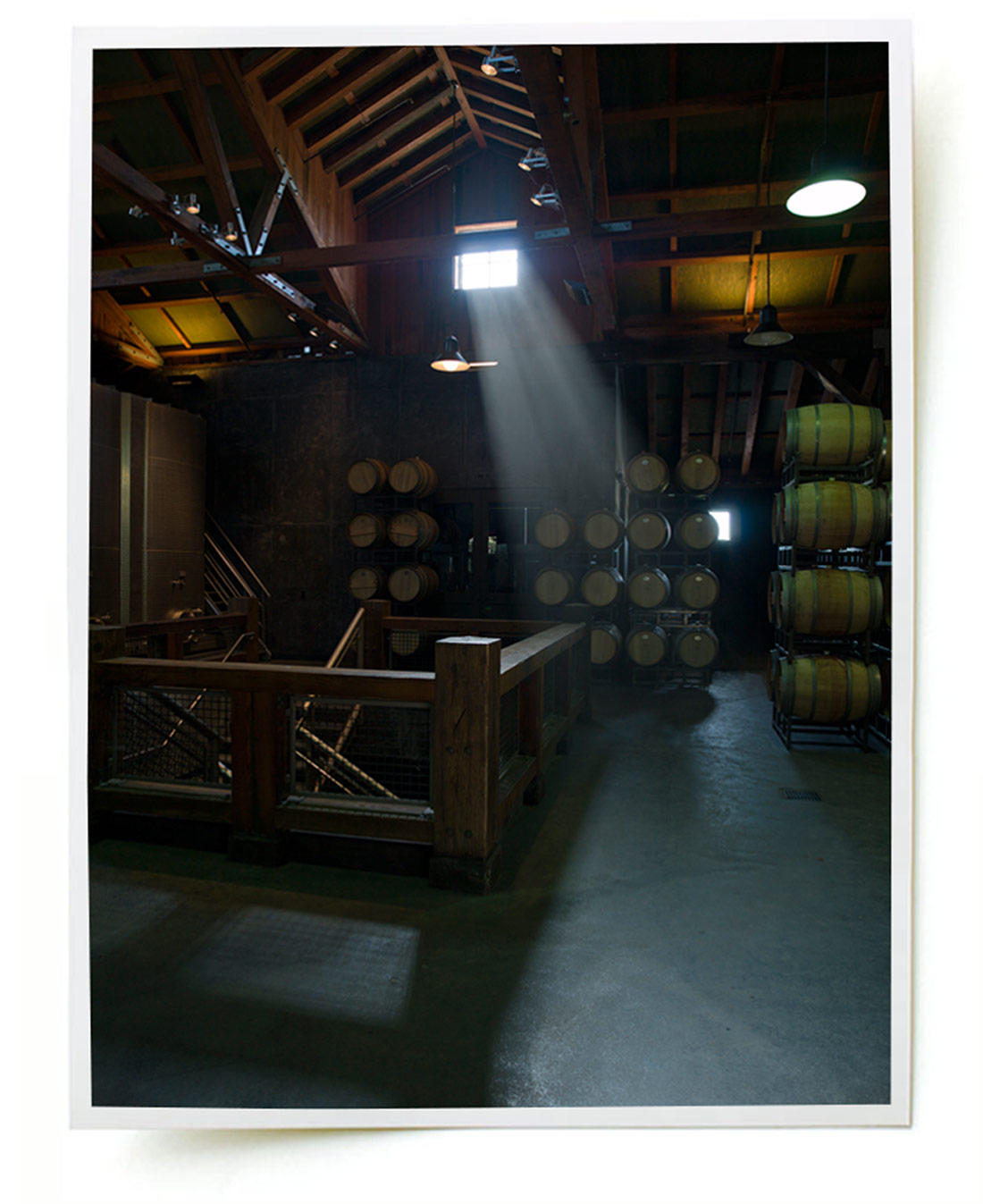 Completion of Barrel Chai allows all winemaking and storage to take place at the winery. Julie starts Tres Sabores winery.

John and Davey Pina spearhead planning efforts for the Rutherford Reach section of the Napa River Restoration Project. The resulting cooperation along the river sets the bar for public/private river restoration. First issue of Syrah and La Grenouille Rouganté, a dry rosé made from ancient Valdeguie grapes from the Rossi property that no one else wanted.

John befriends Jonah Beer, Director of Sales at Stag's Leap Wine Cellars while on the road and teaches him how to cheat on his expense account.

Jonah signs on at Frog’s Leap as General Manager and Vice President of Sales and Marketing.
...and rewrites the book on cheating on an expense account

Shortly after harvest is completed, Frog’s Leap goes solar with a bang—literally a crossed wire created a minor major explosion but the team gets it up and running.

The winery negotiates a long term lease on the Gonzales vineyard.

While serving on the board of the Napa Valley Vintners, John meets Tori Wilder, the new Communications Director. He bails on the board but keeps the girl.

Chardonnay moves to a single vineyard program, with fruit from Tony Truchard in Carneros. The familiar double-wide trailer is towed away and construction begins on the Hospitality Center (The Vineyard House) first envisioned by Ned Forrest in 1995. 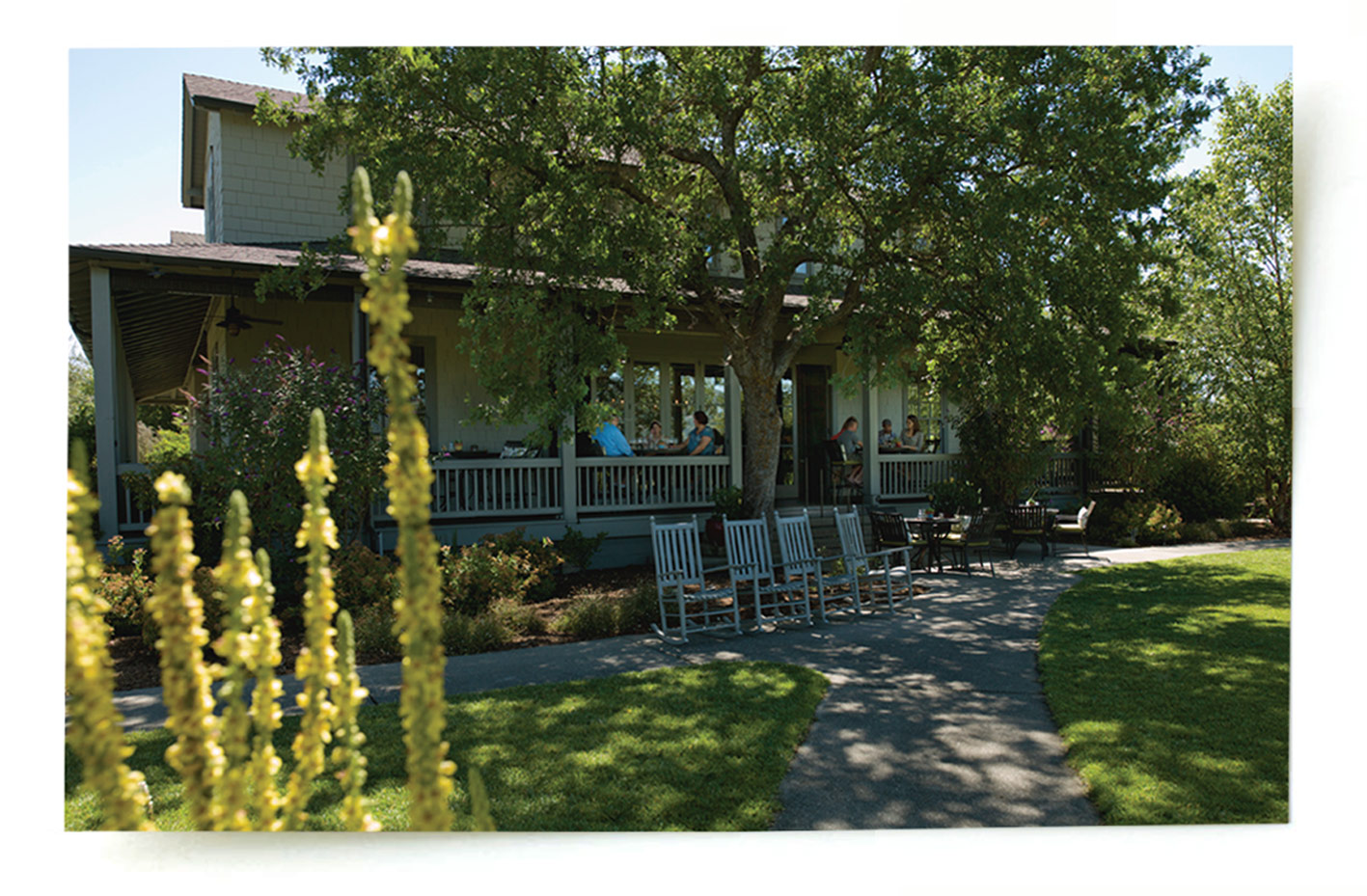 John tries his hand at bötrytized wines with the first issue of a late harvest riesling from the Rossi Estate Vineyard affectionately called Frogenbeerenauslese. The picking crew questions John’s sanity when the request is made to harvest “rotten” fruit. is in awe of John's vision as a winemaker. 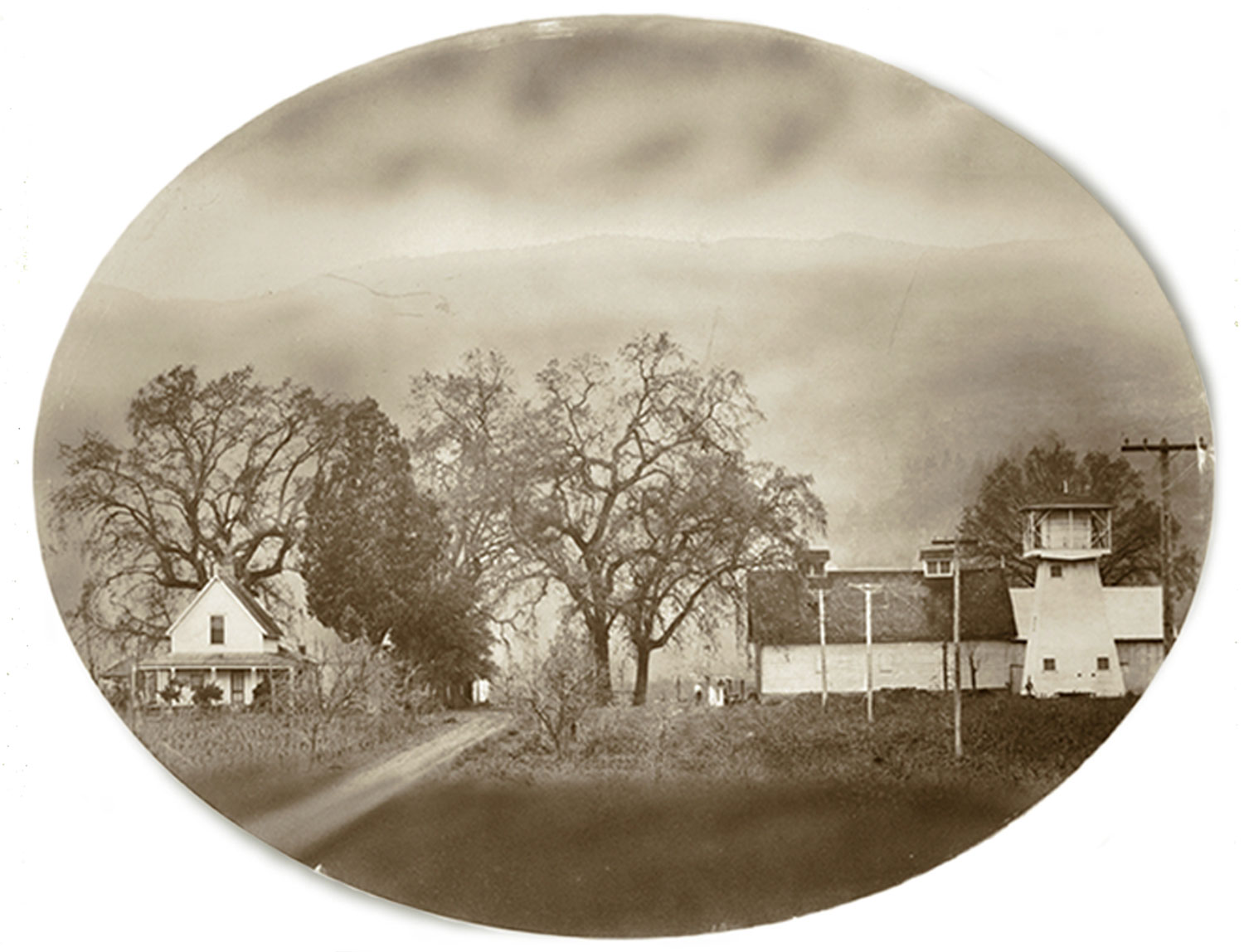 The acquisition of the historic Rossi Estate on Highway 29 is the capstone of an all estate grown cabernet sauvignon program.

A second orchard is planted at the winery, and extensive organic gardens now produce more than 50 different crops in rotation year round.

The Cal Berkeley Marching band makes a brief appearance at the Leap Year Party. John tries to lead the march and walks straight into the tuba.

Replanting begins at the Rossi Estate.

To meet growing demand, winery hospitality begins offering a signature seated tasting on the porch of The Vineyard House in addition to the traditional tour.

The garden program continues its expansion, and begins to supply local restaurants with organic produce and eggs. Small batch preserves are made available seasonally.

Frog’s Leap launches The Fellowship of the Frog.

John receives a “Susti” Lifetime Achievement Award at the Ecological Farming Conference, and ties the knot with Tori in New Orleans.

The inaugural Frogtoberfest Dinner and Retrospective Tasting draws a raucous respectable crowd and kicks off a new harvest tradition.

The Peach Festival is introduced as an annual summertime event. Harvest kicks off with a toast to 30 years of Frog's Leap winemaking.

After decades of mentoring and advice to Frog’s Leap and others, Roy Chavez, affectionately known to all as “Uncle Roy” passes away. 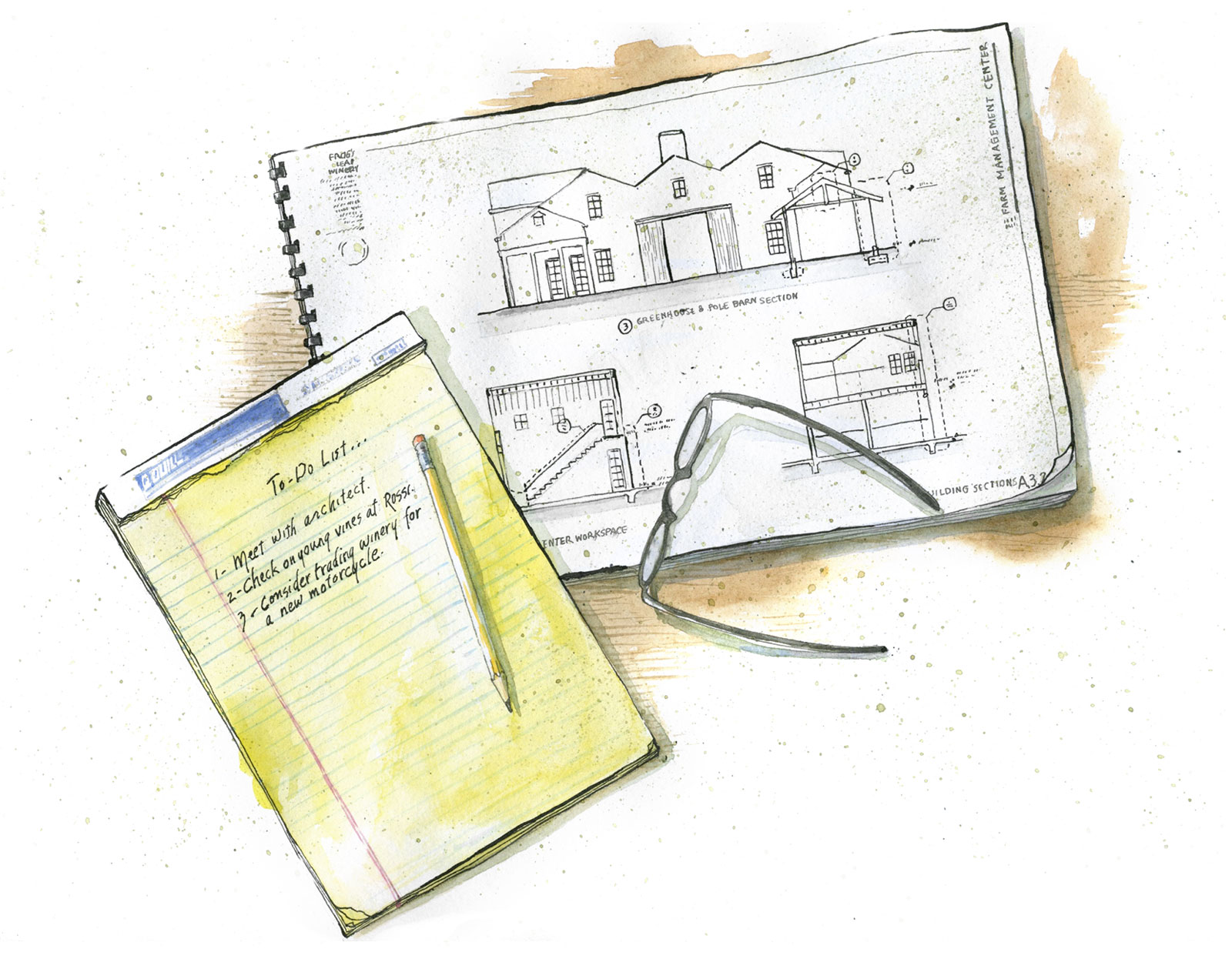 Rory Williams begins work in earnest at Frog’s Leap as a vineyardist.

Chuck House designs a new label for the Estate Grown Cabernet Sauvignon to be introduced in the Fall of 2014.

John begrudgingly starts a twitter feed, abandoning it after a handful of posts.

The first kegs of “Young Vines” Cabernet Sauvignon are tapped at Jamber Wine Pub in San Francisco and Archetype in St. Helena. Frog's Leap employees begin petition to have kegerators installed in the breakroom.

On September 1st, John’s long-time dream of producing an entirely estate-grown Cabernet is realized as the 2012 Estate Grown Rutherford, Napa Valley Cabernet Sauvignon is released into the marketplace.

Shortly thereafter, Frog Fellows gather at the Red Barn for the first annual Harvest Moon Dinner, and a good time is had by all. 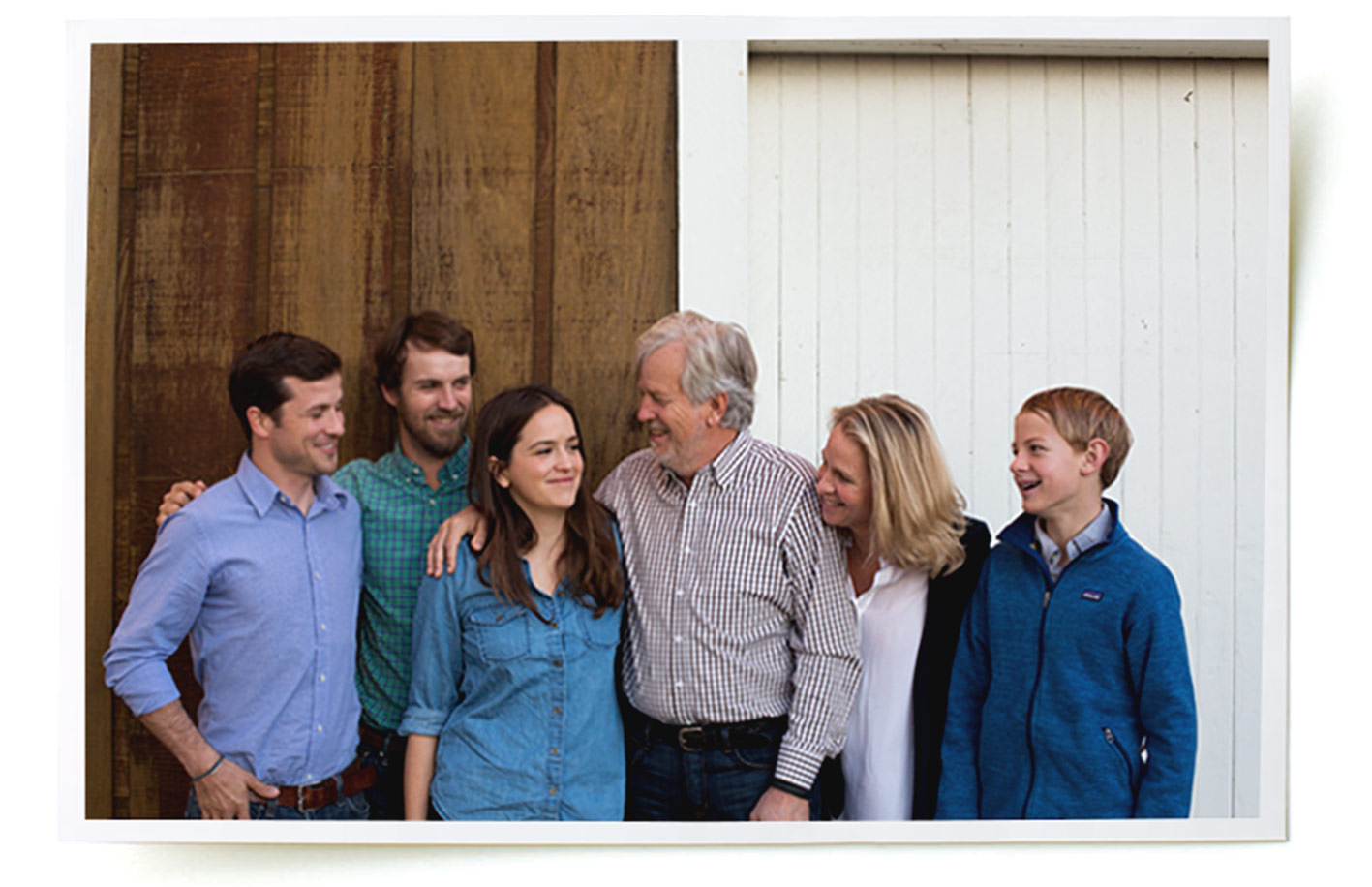